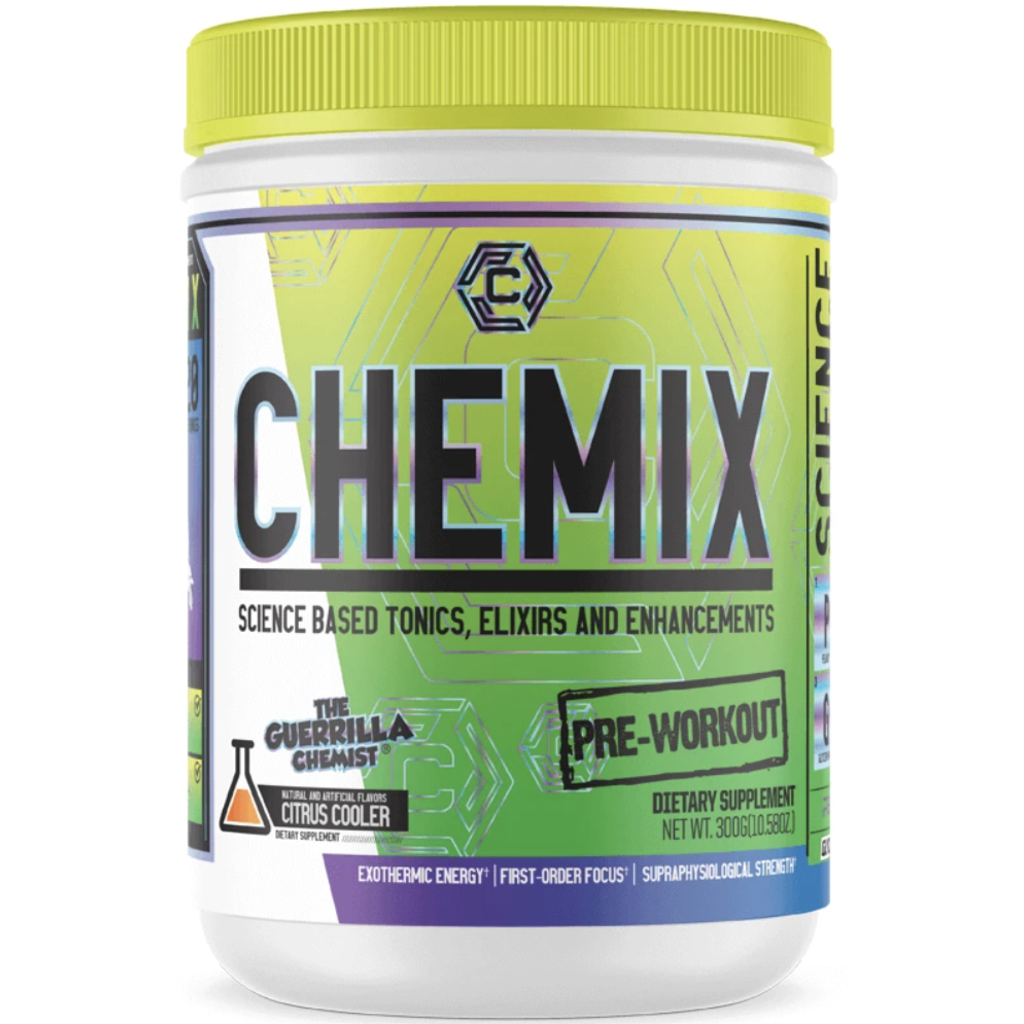 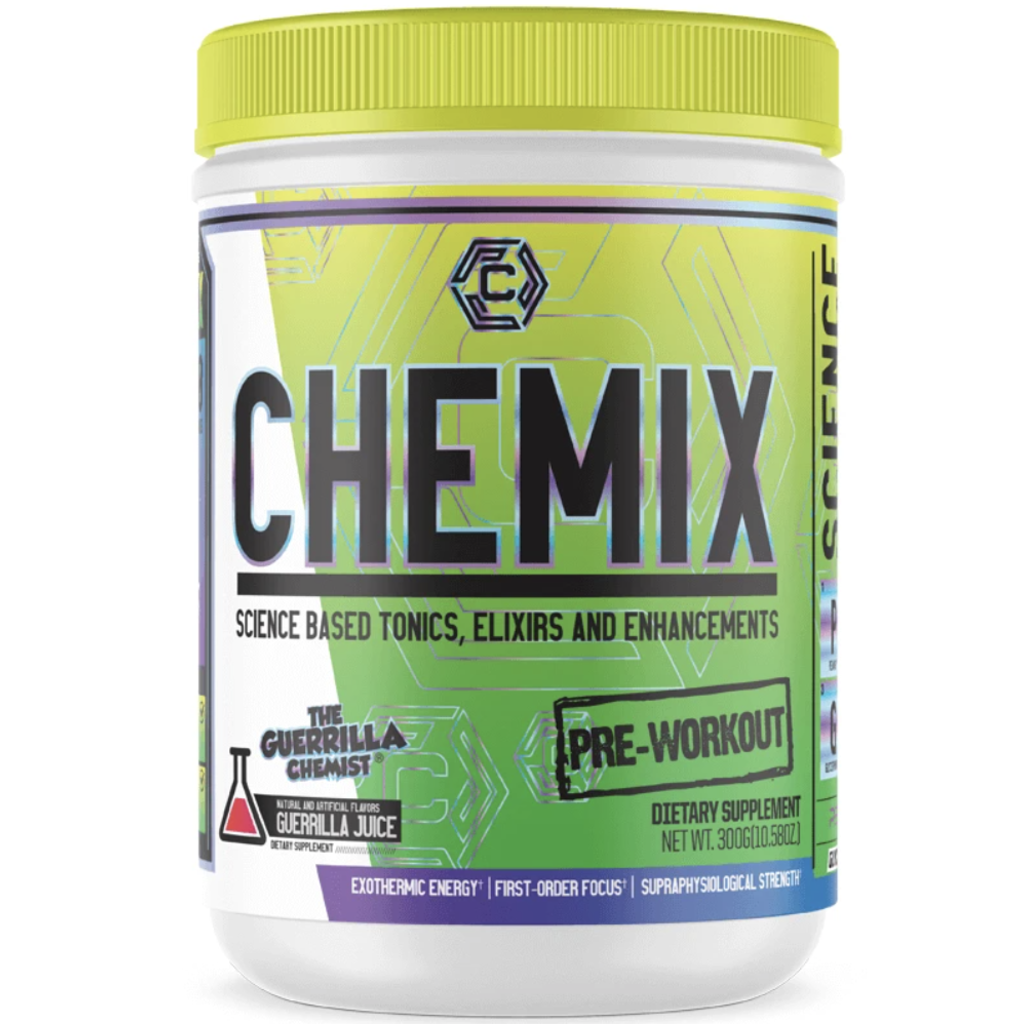 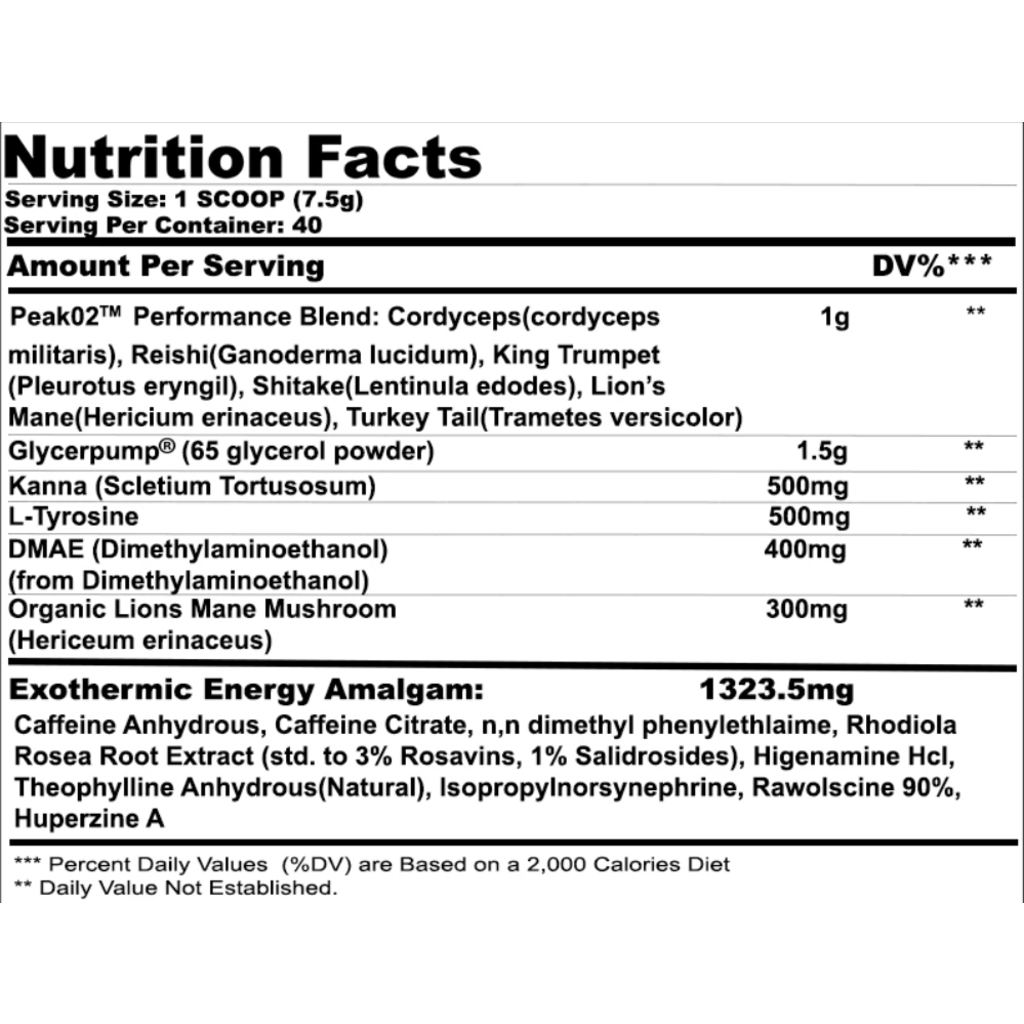 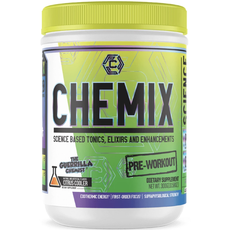 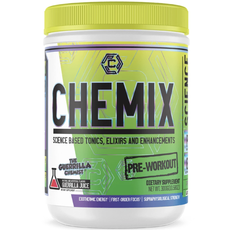 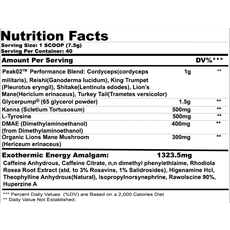 $49.99
Out of stock
Ship it today? ORDER BY 4P M-F
Free sameday pickup ORDER & CONTACT US FOR PICKUP TIME

The advanced formula combines research-backed ingredients at clinical and efficacious doses with potent nootropics and stimulants to give you the perfect workout.

Here is a focus on just some of the superior ingredients in this extremely powerful formula:

PeakO2™: A patented blend of 6 mushrooms shown to increase time-to-exhaustion by 60-fold, increase power output by 17.6% and peak power by 2.8% vs the placebo. Its constituent ingredients have been shown to increase ATP production, VO2 max, and antioxidants, all of which will allow you to perform better in the gym. Dose in 1 scoop is 2g

Kanna (Sceletium tortuosum): This ingredient really makes the formula unique and an added effect you won’t get from other preworkouts. This is an all-natural herb that acts as a nootropic and interacts with 77 different receptors. It has been shown to act as a natural selective-serotonin reuptake inhibitor(SSRi), which can increase serotonin and block its uptake. This can affect your mood in a positive manner, putting you in an extremely focused and euphoric mood. Kanna also acts as a monoamine releasing agent, increasing dopamine, and adrenaline levels. Another benefit of Kanna is its ability to act as a phosphodiesterase 4 inhibitor(PDE4i), where PDE4 regulates mood, long-term memory formation and wakefulness. The studied dose is 25mg, however we used 1000mg of a 2:1 extract in order to maximize its effects and closely mimic how it is used in the food supply.

GlycerPump™: GlycerPump is a new version of a powdered glycerol supplement standardized for 65% glycerol. Glycerol is known as an osmolyte, which is a molecule that attracts a lot of water and can hydrate your cells very effectively. This is known as a state of hyperhydration, which can increase performance and give you crazy pumps. Studies have shown that a state of 2% dehydration can decrease performance by up to 20%. The dose in 1 scoop is 3g.

Lions Mane(Organic) standardized for 25% beta glucans: Lions Mane is a nootropic and cognitive-enhancing mushroom. It has been shown in studies to increase Nerve Growth Factor and decrease beta amyloid levels(which can cause mental decline). This can decrease overall inflammation in your brain and improve levels of cognition, memory formation and metal fatigue. Lions mane also contains erinacine and other compounds that may increase dopamine production and enhance euphoria. The dose of Organic Lions Mane is 600mg per scoop.

Exothermic Energy Amalgam: This is a very specific combination of very strong stimulants, nootropics and adaptogens to increase energy, focus, euphoria and decrease mental fatigue. It took me a very long time to develop this exact blend of cognitive and performance-enhancing ingredients, and every ingredient is in there at an EXACT dose for maximum synergy and effect. There are strong PEA derivatives, caffeine blends, MAO inhibitors, and other releasing agents to maximize focus, stimulation and mood enhancement. For this reason ONLY, I chose to protect my formula and make it a proprietary blend. After almost a year of research and development, I did not want anyone to copy my exact formula.

Directions: As a dietary supplement, take 1 scoop with 8-12 fl oz of water 10-15 minutes prior to workout.